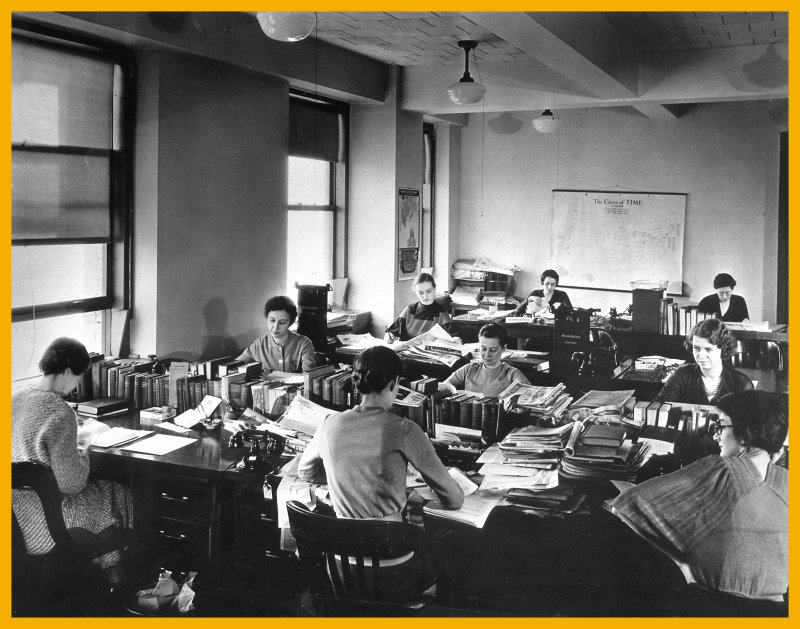 An early use of the term fact-checker can be found in an ad for TIME magazine in 1938 which mentions the expansion of "its researchers and fact-checkers from ten to twenty-two."  Nancy Ford was the first Time fact-checker and she extensively consulted the New York Public Library Information Desk to perform her work.   By the 1930s, the "checkers" were entirely drawn from young women graduating from college.   Their research work was rigorous and involved the "process of surrounding a story", making sure every detail was correct and incorporated into the final story.   If errors were made, the female checkers were generally held responsible, not the male authors of the piece.

In 1971, after  the women at Newsweek filed a successful  complaint with the Federal Equal Employment Opportunity Commission against the sex-segregation of the magazine departments,  the TIME magazine research manual was rewritten to incorporate these workplace changes.  The fact-checkers were renamed "reporter-researchers" and  the job was opened to men.  In  later decades, the duties of the checkers gradually evolved: reporters did some of their own fact-checking and the checkers expanded their responsibilities to include reporting.

Fact-checking at other publications

The  New Yorker has a longstanding reputation for its fact-checking department.  The German newsmagazine Der Spiegel once had the largest and most respected fact-checking operation in the publishing world.   But in 2018 , a celebrated reporter was exposed for fabricating stories which the fact-checkers never caught.