Family Snaps: A Selection of Images in the BU Libraries Collections 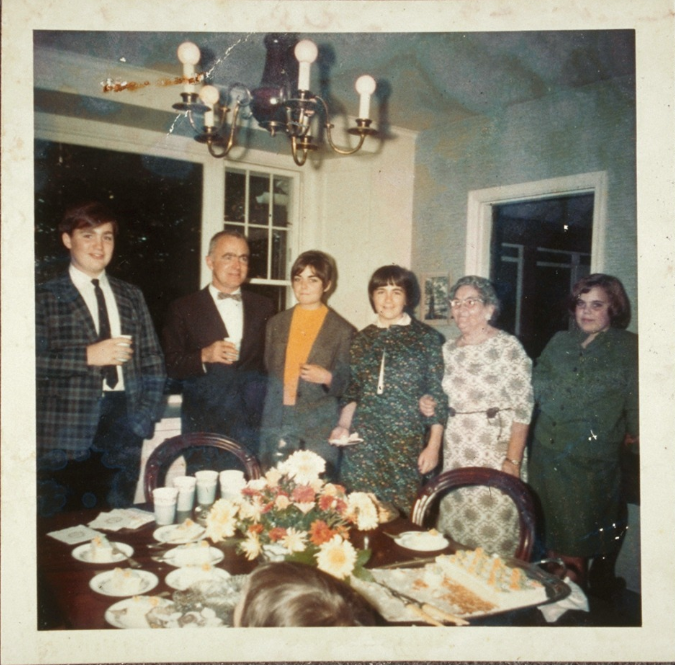 Parry family gathered behind a table. Arthur and Elizabeth Schlesinger Library on the History of Women in America (Radcliffe Institute for Advanced Study, Harvard University) (From the database ArtStor) 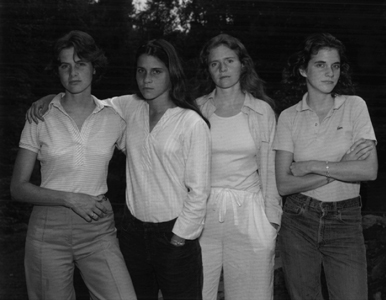 "The portraits of the Brown sisters are about a moment in present time in spite of the fact that they instantly become a testimony of the past—a slice of history, as well as a trace for future spectators, who one day will see them as documentation of women who once were alive." 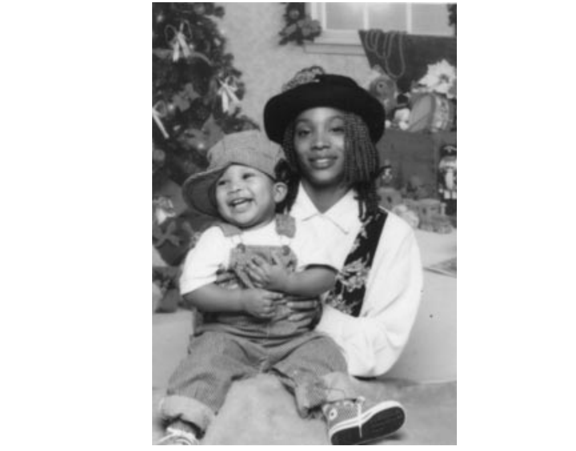 Professional portrait, purchased by teen mother, of herself and her child, California, 1993. Photo by Sears Portrait Studio. (From "Baby Pictures: Family, Consumerism and Exchange among Teen Mothers in the USA" in the journal Childhood, May 2004.

"The backgrounds provided by the photo studios often include toys and the studios also provide toys as props for the photo. Most of the teen mothers choose to use these props, usually stuffed animals. These toys in the pictures are a public symbol of the material goods that the mother is providing for her child, most of which remain private, at home." 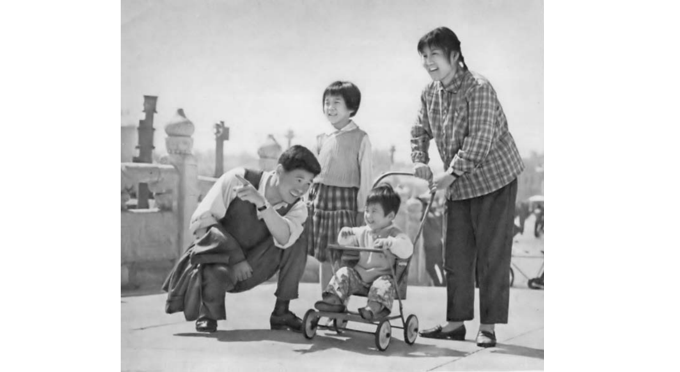 "The picture-perfect family of the 1970s— a nuclear family of father, mother, and two children, preferably a boy and a girl— is again visualized in a black-and-white photo set in Tiananmen Square. .... This image of an idealized nuclear family represents the newly revamped face of China, set in a rapidly changing domestic and global environment." 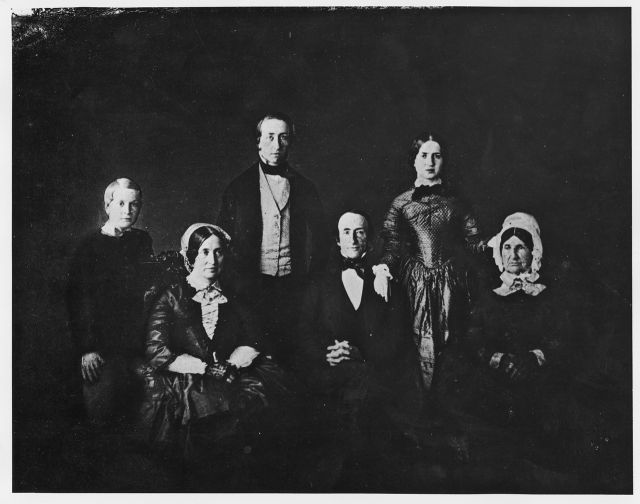 "At the age of 21, Charles Penniman Daniell sailed around the Horn from Boston to San Francisco in 1849–1850, and operated a hardware store in the gold rush metropolis for three years. In his letters, Daniell repeatedly beseeched his family to send him a daguerreotype portrait, and in 1851, they obliged. From left to right: “Eddy” (likely Edward, his brother), Sarah (his mother), William (“Willie,” his brother), Josiah (his father), Lucetta (his sister), and (grandmother) Daniell. " 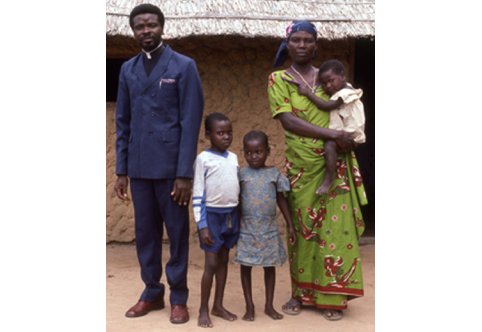 Kuba family wearing contemporary dress for a family photograph, Pombo, Democratic Republic of Congo, 1989. The mother wears a double pagne with matching blouse. The father wears a modified abacost over his clerical collar while the children wear an assortment of secondhand clothing. Photograph by Elisabeth L. Cameron. (from "Kuba Dress and Textiles" in Berg Fashion Library database)

"Located approximately five degrees south of the equator, the elevation of 1,500 feet (457 meters) makes the climate relatively temperate. While nighttime temperatures can be cooler, daytime highs average around 80 degrees Fahrenheit (27 degrees Celsius). The Kuba, then, wear clothing as visual statements of personal, family, and community identity rather than for protection from the elements." 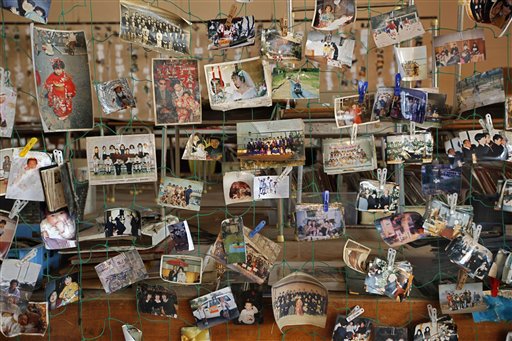 Family photos retrieved from the tsunami-hit area are on display at an elementary school gymnasium, where they are gradually being cleaned and put on display by volunteers, in Natori, Miyagi Prefecture, northern Japan, Wednesday, April 13, 2011.  (AP Photo/Vincent Yu) (From the AP Images database)

"Soldiers and residents have been bringing photos and albums found in the wreckage of local homes, in the hope that their owners will find them. With an estimated 25,000 killed in the devastating tsunami and many more displaced at shelters, only a small fraction of the photos have been reclaimed by survivors so far." 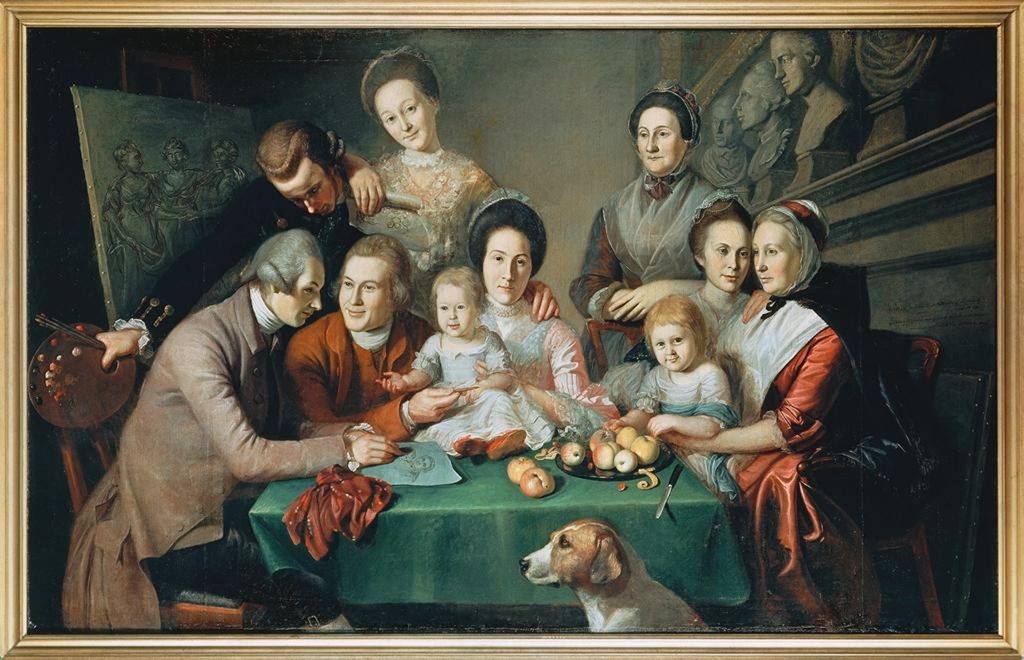 "Regardless of whether he was prompted by a desire to represent and memorialize a particular family dynamic with its various subtleties or to commemorate a specific moment or event, Peale did choose to make an exhibition piece of it, something to be displayed to a broader though presumably privliged public..." ("Private and Public in 'The Peale Family': Charles Willson Peale as Pater and Painter," in Proceedings of the American Philosophical Society, June 2012) 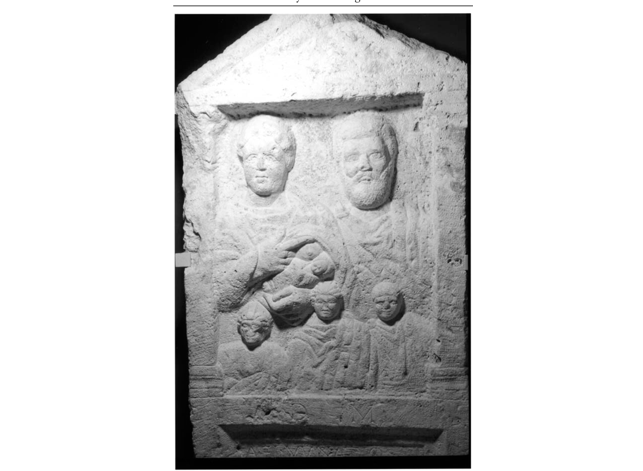 Stela of Aelius Munatius, Aurelia Cansauna, and family, Intercisa (Hungarian National Museum, Budapest (From "Children and Parents on the Tombstones of Pannonia" in the e-book The Roman Family in the Empire: Rome, Italy, and Beyond)

"The analysis of the Pannonian tombstones sheds light on cultural ideals in this frontier province, where Roman and non-Roman alike apparently construed ‘family’ in terms of affection between husband and wife, parent and child, and siblings." 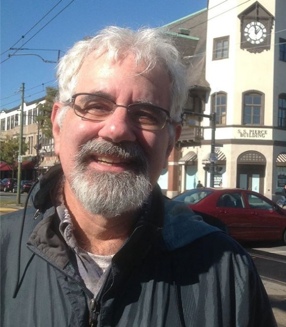