...regarding censorship in boston

“Banned in Boston: Commercial culture and the politics of moral reform in Boston during the 1920s”

Banned in Boston: The Watch and Ward’s Society’s Crusade Against Books, Burlesque, and the Social Evil.

“Censorship in New York and Boston”

“Censorship rears its head in Boston”

“Class, culture, and campaigns against vice in three American cities, 1872-1892″

“Margaret Fuller as Cultural Reformer: The Conversations in Boston”

“Publishers speak out against censorship: cooperative advertisement in Boston Herald and Boston Traveler”

“Richard Sinnott–‘City Censor’ of bluenose Boston,” obituary.  Tom Long, Boston Globe, May 2, 2003. “From 1955 until 1982, when the position was eliminated, Mr. Sinnott was chief of the Licensing Division of the city of Boston — but everyone knew him as the “City Censor.” It was his job to view movies, strip acts, rock concerts and other touring shows to determine whether the productions met city standards or would be “Banned in Boston” — a determination that ended their runs in Beantown, but often increased business substantially for their runs in other towns. Some producers avoided being banned, but others sought it.”

“Books and plays banned in Boston”

“Boston Book Censorship in the Twenties”

“Boston is afraid of books”

...regarding booksellers and bookselling

“Boston bans sale of ‘Elmer Gantry': will prosecute any who sell Lewis novel under law against ‘indecent and obscene’ books” 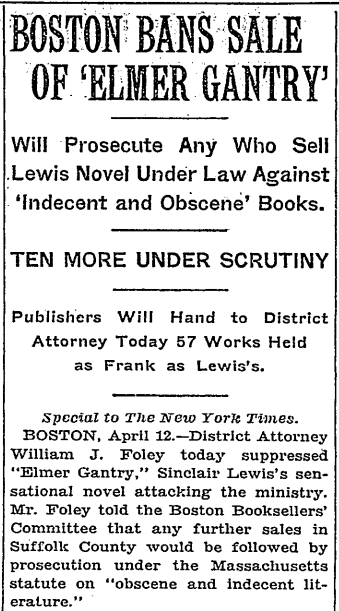 “Embattled booksellers: a review of the hearing on book censorship before the Committee on legal affairs in Massachusetts”

“Boston and the movie censorship”

Birth of a nation

“Boston, Mass.–State legislature has passed a bill, backed by opponents of the phot0-play, ‘The Birth of a Nation,’ to vest unlimited powers of play censorship in Boston with the mayor, police comr. and chief justice of the municipal court. An objectionable production can be stopped by a majority vote of the new censors. Formerly censorship was vested in the mayor and police comr., who had power to stop plays of an immoral or obscene nature [Descriptive Statement].” 1915. Source not given. PAIS Archive AN: 1915-5016.

“Banned in red scare Boston: the forgotten story of Charlie and the M.T.A.”

Peter Dreier and Jim Vrabel, Dissent, Spring 2008)  “THE IDEA FOR “M.T.A.” came one day when Sam and Arnold Berman were joking about one of the peculiar aspects of the recent fare increase. Although riders of the Boston system were still only charged ten cents to enter underground subway stations, they were now being charged an additional five cents to get off trolleys at aboveground stops. “Arnold and I were saying that if you didn’t have a nickel, then you could never get off the subway and you’d never get home,” Sam Berman recalls.”

Banned in Boston: A study of theatrical censorship in Boston from 1630 to 1950, William Robert Reardon.

The rule applies particularly to feminine acrobats who enter clothed in a profusion of apparel and gradually eliminate, in view of the audience, such clothing as might hinder their actions upon the trapeze. [Descriptive Statement]” Source not given. PAIS Archive AN: 1916-7513

Censorship of the Theatre in Boston.

Dangerous Theatre: The Federal Theatre Project as a Forum for New Plays.

George Kazacoff.  Chapter VII: The East, pp. 185-197.  “Because of Boston’s tradition of censoring plays, FTP tread lightly in that city to avoid controversy–anything reflecting economic conditions, politics, or the contemporary social scene in a way that would not be ‘traditional.'”  Plays discussed:  Lucy Stone, 1936; Created Equal, 1938; A Moral Entertainment, 1938.  Mugar PN 2270 F43 K39 2011

“Every Monday when the new shows came to town, Mr. Sinnott would leave his third-floor office in Old City Hall — with the bust of Cardinal Cushing on the desk and the picture of President Kennedy on the wall — and take a leisurely stroll to the Casino or the Old Howard Theater. He would take his customary seat backstage, so he could view the new shows without being seen by the audience, while he made sure the pasties and G-strings were where they ought to be on  Lily St. Cyr, Crystal Las Vegas and Angela the Upside Down Girl.”

“Scandal on the stage: banned theatre in Boston”

John D. Anderson, professor, communications, Emerson College; Matthew Chapuran, managing director, Nora Theatre Company; Tom Connolly, professor, English, Suffolk University; Maureen Dezell, arts reporter, Boston Globe. “‘Banned in Boston’ is a theme this city finds hard to shake. This program includes vignettes of censored plays in Boston, beginning with the Puritan censorship of Morton’s May Pole and climaxing with the 1929 banning of Eugene O’Neill’s Freudian theatrical experiment, Strange Interlude. Afterwards, a panel discusses the performances and the ideas of censorship. Though it is not institutionalized, as it was with the ‘Watch and Ward Society’, what form does censorship take today?” WGBH Forum Network, Thursday, May 1, 2003, Old South Meeting House. 24 July2006.

“Toward an Understanding of the First Amendment: Boston Newspapers, 1782-1791″

...regarding the Boston Public Library

“Boston’s battle of the books”

“Censors and the library: symposium”

The editor, the blue nose and the prostitute

Banned in Boston: The development of literary censorship in Massachusetts, Ralph Edward McCoy.

“Boston has not fought for freedom of expression in literature”

“Censorship and a Farewell to Arms”

“H.L. Mencken and the Wowsers”

Out of the chrysalis: Lillian Smith and the transformation of the South, Kathleeen Atkinson Miller.

“Poor me and pure Boston”

Full disclosure - the "Banned in Boston" content is brought to you by my colleague Ruth Thomas. See her Boston & Its Neighborhoods guide  for more information specific to Boston.